Total Football News | All the news about Football | Page 605

Chelsea&apos;s Danny Drinkwater joins Aston Villa on loan for rest of the season

Drinkwater travelled to Villa's Bodymoor Heath training ground on Tuesday morning and joins Dean Smith's side for the rest of the season.

The 29-year-old midfielder had spent the first half of the campaign on loan at Burnley from Chelsea, but has struggled to make an impression in Sean Dyche's side, limited to just one appearance in the Premier League and two overall.

Drinkwater was sidelined for a stint earlier in the campaign after suffering ankle ligament damage in September during an incident at a Manchester nightclub.

The Manchester United academy product was part of Leicester's Premier League-winning side in 2016, and moved to Chelsea in a £35million deal a year later.

But he found himself short of playing time at Stamford Bridge and the three-times capped England midfielder is seeking a new start.

This news item was provided by the The Independent - Premier League website - the original link is: https://www.independent.co.uk/sport/football/transfers/chelsea-transfer-news-danny-drinkwater-aston-villa-loan-latest-a9273606.html

Sokratis | In my own words

You've heard me say it many times before but it's true: I like the zero in the defence.

That's always been the case and it's why I chose to be a centre back, because it's my best position in football. I think I started playing there properly when I was 12 or 13 years old. Nearly 20 years later, I think it was the right decision.

When I was growing up, I studied the Italian style of defending. I'd watch defenders like Paolo Maldini and Fabio Cannavaro. Roberto Ayala was also very good. Then as I got older, I'd look at players like Carles Puyol. Players who won a lot and had a lot of quality, too.

You've also got very good defenders now. What Virgil van Dijk did last year was something very difficult for every defender to do. Last year for him was perfect, especially for all the people close to him who helped him a lot.

He was very good and it was a good year for him. With the way football is going in front, especially when everybody thinks about offensive players and how they can score more, I think the defenders need to start getting more credit.

Football has changed a lot in the past 10 or 12 years. When I started football, I was in Italy. I was in Greece first, but afterwards I made the step to Italy. It was not so necessary to play out from the back and because of this, you also didn’t concede a lot of chances or a lot of goals.

Now, every team, or most, has to start from the back and exchange a lot of passes to arrive in the opposite area and to score. The more passes and more things you do, you also have more risk inside. For this, it’s more beautiful football, but also the teams concede more goals because the players are not robots. Everybody makes mistakes.

That's why being a defender these days is very difficult. I think it is one of the most difficult positions. Maybe you don’t have to run like a midfielder, but every mistake that you do is a very hard mistake for the team, so you pay very expensively.

But I still love being a defender. And for me, the part I enjoy most is when you can defend well like a team, to control the game, to fight for every ball and every duel.

Sokratis challenges Zlatan Ibrahimovic during their time in Italy

Every day is the one you have to show to everybody that you have a strong mentality and also your qualities in the game and mentality, especially to win. We have had some difficult moments this season and we know we need to improve, but we have the quality to do it. We just need the confidence.

The thing that carries me on is to win the game, go home with the three points and to do the good work and make a positive difference. You have to change and adapt with football, and this is why you train every day.

Competing against different types of player helps, too. When you know that one player is fast, you have to give him a little bit more space to have the time to react. When a player is more static and is a player who plays with the body, you have to be more aggressive and near to him.

Sokratis competes with Lionel Messi at the 2010 World Cup

This comes from experience and how you work every game. Every player is different so I think the football player never stops learning. Also, players who won the Champions League one, two or three times or have won everything with the national team, they keep learning and this is coming every day from training and games.

To be one of the best defenders, you need to have everything to be complete. It’s about focusing on the game very well, pace, power, technique also, to control the game from behind.

It's also important to be a winner and to be a winner, your mentality has to be at a high level every day. In every game, every training session, every duel, you have to win it.

If that means we keep the zero in the defence, then I've done my job.

This news item was provided by the Arsenal FC News Feed website - the original link is: http://feeds.arsenal.com/~r/arsenal-news/~3/kJph8015XJ4/sokratis-my-own-words

Beckford: Leeds can thrive in the PL

"It doesn't matter which one of their personnel are playing, the manager will always find a way to play the 'Leeds United Way'," says Jermaine Beckford 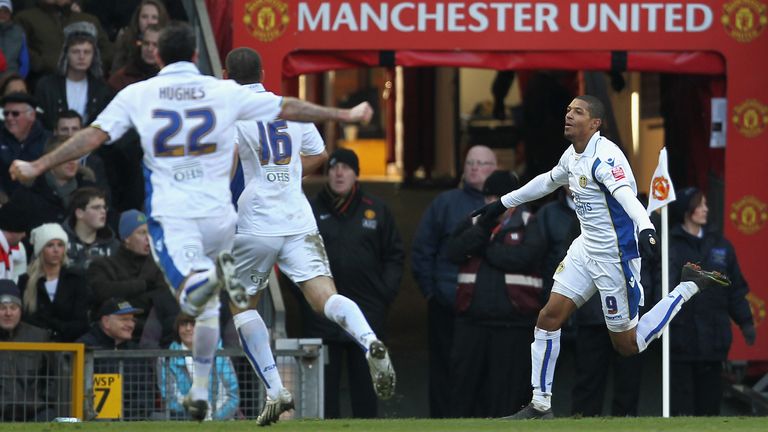 0:28 Former Leeds United Jermaine Beckford believes his former side can flourish in the Premier League after Monday's performance against Arsenal in the FA Cup third round

Former Leeds striker Jermaine Beckford believes his former side can flourish in the Premier League after Monday's performance against Arsenal in the FA Cup third round.

Despite being knocked out of the FA Cup, Bielsa's men put on an impressive display at Arsenal that left Beckford feeling confident about his former team's chances in the Premier League, if they do secure promotion.

"Everybody that has seen the first half against Arsenal, will say absolutely the team has more than enough to thrive in the Premier League", the former striker told Sky Sports News.

"Leeds have more than enough [to compete]."

Beckford also praised the work of Bielsa and his coaching team for the style of play they have implemented, bringing back the 'Leeds United Way' of football. 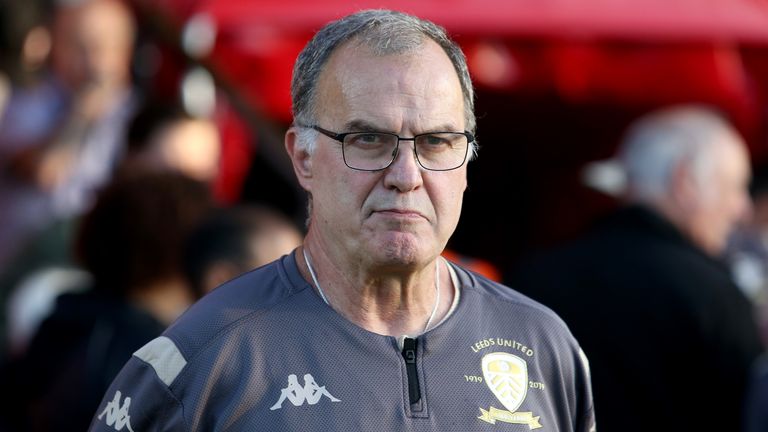 "If you've not seen Leeds play before, I think a lot of people will be surprised with the way they dominate possession and movement against the opposition.

"Having watched Leeds for a number of years under Marcelo Bielsa, you understand that's his game plan, that's how he likes to play.

"It doesn't matter which one of their personnel are playing, the manager will always find a way to play the 'Leeds United Way'.

It was Beckford's winner that gave Leeds, then a League One team, a famous FA Cup victory over their fierce rivals Manchester United at Old Trafford in 2010. 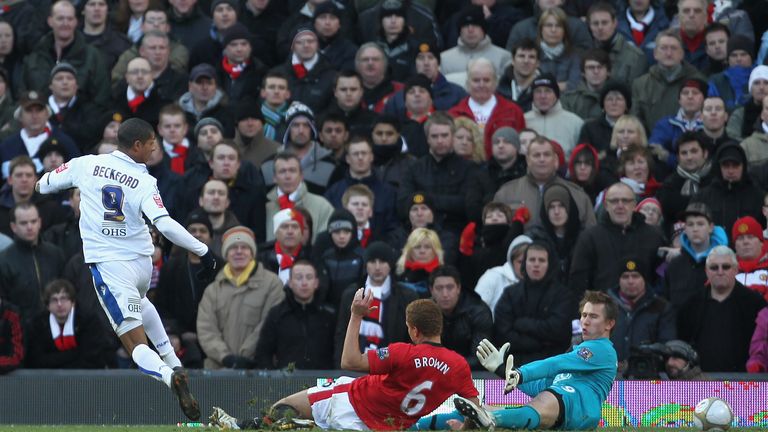 The former striker says Leeds will need to sign a forward if they are to compete in the Premier League next season and jokingly suggested that he is available.

"There needs to be one or two additions in terms of an out-and-out goal-scorer but it's got to be the right player and it will be with the amount of detail that goes into the recruitment process.

This news item was provided by the SkySports | News website - the original link is: https://www.skysports.com/football/news/11688/11903038/leeds-united-can-thrive-in-the-premier-league-says-jermaine-beckford

Reiss Nelson scored the winner as we booked our place in the Emirates FA Cup fourth round by beating Leeds United at Emirates Stadium.

Our young forward popped up in the box after good work by Nicolas Pepe and sent a scruffy finish beyond Illan Meslier to set up a clash with Bournemouth at the end of the month.

You can watch a short highlights clip of the game by clicking 'Play' on the video above.

You can also click 'Play' on the video below to see extended highlights.

This news item was provided by the Arsenal FC News Feed website - the original link is: http://feeds.arsenal.com/~r/arsenal-news/~3/443hEST3VrM/highlights-nelson-nets-winner-against-leeds

After impressing Aubameyang with his commentary skills, Arsenal Nation LIVE invited JG Harvey to the Arsenal v Leeds game to give his anaysis of a classic Thierry Henry goal...

This news item was provided by the Arsenal FC News Feed website - the original link is: http://feeds.arsenal.com/~r/arsenal-news/~3/piv_m7BgfYM/jg-harvey-arsenal-nation-live