Total Football News | All the news about Football | Page 5

Reports suggest the 24-year-old, who has scored 25 goals in the Bundesliga this season, has a release clause of about £54m.

The Germany international had been linked with Liverpool and said he was "proud" of that association.

But BBC Sport understands Liverpool are not interested in signing Werner, who has has netted 11 times in 29 games for his country.

Werner would be Chelsea's second signing for next season after already completing a £37m deal for Ajax winger Hakim Ziyech in February.

He has impressed at Leipzig following his 2016 transfer from hometown club Stuttgart.

Werner scored a hat-trick in Leipzig's recent 5-0 victory over Mainz and he also netted three times against the same opposition in an 8-0 win before Christmas.

This news item was provided by the BBC Sport - Football website - the original link is: http://www.bbc.co.uk/sport/football/52928359

Chelsea could be crowned Women's Super League champions via a points-per-game system, while Liverpool wait to find out if they will be relegated.

Second-tier leaders Aston Villa are poised to go up to the WSL, if the Football Association opt to maintain promotion and/or relegation.

The main FA board will decide how to determine final standings.

The WSL and Women's Championship seasons were formally ended on 25 May, after "overwhelming feedback from clubs" as it was decided not to attempt to resume the campaign.

The joint leagues' board for the WSL and Women's Championship sent various recommendations to the main FA board on how to "determine the most appropriate sporting outcome for the season", after previously consulting with clubs from both divisions.

Manchester City were top of the WSL when the season was suspended in March because of the coronavirus pandemic, but second-placed Chelsea had a game in hand on the leaders and any points-per-game calculations would see Chelsea climb above City.

Alternatively, the FA board could decide to declare the campaign null and void - as was the case with tiers three to seven of the English women's pyramid - and merely put forward two teams to Uefa as England's representatives in next season's Women's Champions League "based on sporting merit".

At the foot of the WSL, Liverpool are in danger of being relegated, sitting a point below second-from-bottom Birmingham - who had played one game fewer than the Reds - while Aston Villa are six points clear of Sheffield United at the top of the second-tier Championship.

It is understood no decision has yet been made regarding the conclusion of the Women's FA Cup, which had reached the quarter-final stage before March's suspension of elite football in England, but the cup competition remains under consideration by the FA.

What next for the women's game's calendar?

Provisional start dates for the 2020-21 season have not yet been announced, but there have been calls for the women's game to attempt to utilise gaps in the calendar to maximise broadcast exposure while fans are watching sport from their homes.

Lynsey Douglas, global lead for women's sport at analytics provider Nielsen Sports, told BBC Sport: "All the metrics around audiences are increasing. We know the interest is there. The appetite is there and the audience is there.

"Everything is behind closed doors at the moment so there's a bit of a level paying field for men's and women's sport.

"We know the men's Premier League are going to conclude their campaign, but they're going to need an off-season before their next season, so is there a gap there for women's football to get in and do something different, grab that window of opportunity, because we know there's so much appetite for sport at the moment.

"Women's sport audiences are younger, more often on social media, and they're better suited to the current situation, they're more digital-savvy, they're ready to engage on social media, which is the situation sport is finding itself in."

This news item was provided by the BBC Sport - Football website - the original link is: http://www.bbc.co.uk/sport/football/52927138

The Independent employs over 100 journalists around the world to bring you news you can trust. Please consider a contribution or subscription.

Anfield had been the 24-year-old’s preferred destination, a fact he hasn’t concealed, but the Premier League pacesetters made no commitments over meeting his valuation.

Jurgen Klopp has been a long-time admirer of the forward and had a conversation with him around early April, in which he expressed that the financial implications of coronavirus rendered it hard for the club to accede to any huge outlays.

Liverpool were preparing for a relatively quiet summer before the pandemic hit, with their desire to be more measured ballooning given the unprecedented loss in income due to the suspension of football.

The priority has been to lock down Virgil van Dijk and Alisson for the long-term, while continuing to reward players that have delivered Champions League success and are close to ending a 30-year wait for the league title.

There was an appreciation that being prudent would open the door for rivals to pursue Werner with his clause expiring on 15 June, which Manchester United and Chelsea have both done. The latter have been more relentless in their approach and have offered Leipzig’s talisman triple his current wages.

Sources in Germany indicate to The Independent that Werner’s salary will rocket to £16m a year, with a fee of £12m going to his agency. Karlheinz Forster, the player’s representative, is understood to have held discussions with Leipzig on Thursday to inform them of Chelsea’s willingness to activate the clause.

Werner, who has scored 32 times this season, will be guaranteed more minutes at Stamford Bridge and was sold by Frank Lampard’s vision of rebuilding the club, which he will be a core part of.

This news item was provided by the The Independent - Premier League website - the original link is: https://www.independent.co.uk/sport/football/transfers/timo-werner-chelsea-transfer-news-rb-leipzig-liverpool-latest-a9549676.html

The Premier League broadcasters have reached agreement for all opening fixtures up to 2 July, with Aston Villa vs Sheffield United set to kick off Project Restart, and Tottenham Hotspur vs Manchester United to be the big Friday night game on Sky Sports to open the first weekend.

The channels have spent the last few days in talks, and are close to a completed schedule, but a few minor issues – like the exact timing of some fixtures – mean the official list won’t be published until Friday.

The schedule will follow plans to televise every game, meaning all fixtures are staggered until the final day.

Manchester City vs Arsenal will immediately follow Aston Villa’s curtain-raiser, with the match at Villa Park starting at 6pm on Sky, and the game at Etihad kicking off at 8.15pm.

Bournemouth vs Crystal Palace is meanwhile set to be the first league game on BBC since 1988.

This news item was provided by the The Independent - Premier League website - the original link is: https://www.independent.co.uk/sport/football/premier-league/premier-league-fixture-list-season-dates-kick-off-times-latest-a9546486.html

Brunt: "I should make it clear that my entire focus over the next few weeks will be on doing everything in my power to get us back to the Premier League." Chris Brunt will leave West Brom when his contract expires at the end of the season after 13 years at The Hawthorns.

The midfielder, who joined from Sheffield Wednesday in 2007, will not have his contract renewed.

He has been limited to nine appearances this term and held talks with Albion's technical director Luke Dowling about his future this week.

"It has been the honour of my career to have played for this great football club for the last 13 years but today I must begin saying goodbye," said Brunt, who is aiming to win a third promotion with the Baggies this season.

"Before I go any further, I should make it clear that my entire focus over the next few weeks will be on doing everything in my power to get us back to the Premier League, to where this club and its fans belong.

"Though it may not come as a massive surprise to many, I thought it best we clarify the situation now, before we begin playing the final nine games of the season. We cannot afford to have any distractions from our goal." 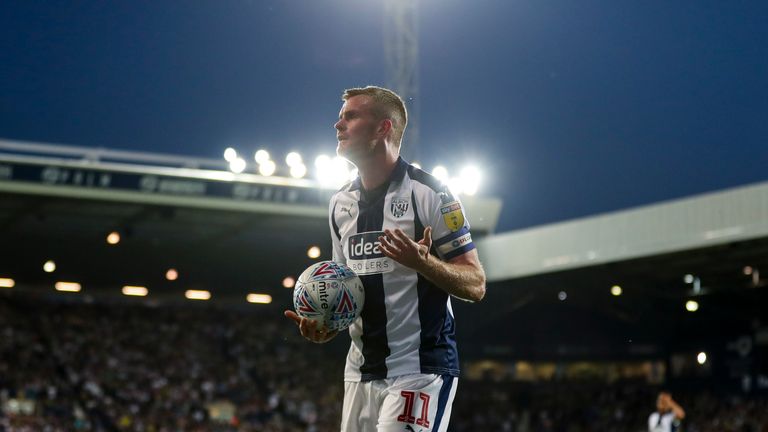 Brunt is one of only 16 players to have made more than 400 games for the Baggies and holds the record of Premier League appearances, 269, for the club.

In total he has played 419 times for Albion, scoring 48 goals, and has also earned 65 caps for Northern Ireland.

Dowling added: "In one sense it was a difficult conversation to have with Chris because I knew we were saying goodbye to a genuine club legend.

"But it was also made easy by Chris's professionalism and acceptance of the situation. In this day and age, to have stayed 13 years and logged more than 400 games, most of them at the highest level in the country, is astonishing.

"But football always moves on, Chris accepted that. He is disappointed not to have played more this season but he has not given up yet on making a contribution over these last nine games and has committed to finishing off the campaign doing everything he can to help us achieve our aims."

This news item was provided by the SkySports | News website - the original link is: https://www.skysports.com/football/news/11688/12000629/chris-brunt-to-leave-west-brom-at-end-of-season