Play-off finals greatest games: 15-11 | Total Football News
This is the weekend when the nation usually stops to watch some of the finest, most frantic and fraught matches on the English football calendar. The play-offs rarely disappoint and so, in their absence, Sky Sports have been speaking to many of tho... This is the weekend when the nation usually stops to watch some of the finest, most frantic and fraught matches on the English football calendar.

The play-offs rarely disappoint and so, in their absence, Sky Sports have been speaking to many of those who helped make past games so memorable.

We will get into our top 10 on Sunday, and reveal our top five on Monday, but here you can enjoy our countdown from 15 to 11, featuring "one of the greatest goals you will ever see at Wembley", and that volley from one of the most popular figures in football…

Charlton were First Division champions in 1999-2000, and after Manchester City came from behind on the final day to seal second, Ipswich were forced to navigate the play-offs.

A rollercoaster 7-5 aggregate win in the semis over Bolton, which featured a second-leg 5-3 victory after extra time, saw Ipswich book a showdown with Barnsley in what would be the final First Division play-off final at the old Wembley.

The match lived up to the occasion, as the two play-off final first-timers played out a six-goal classic. 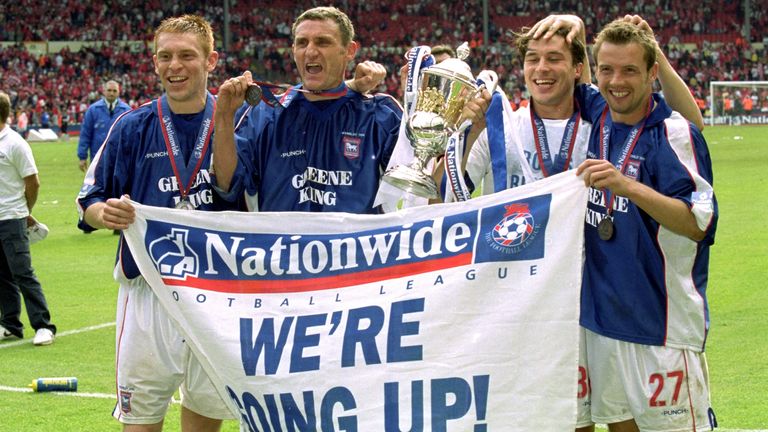 Barnsley led through a Richard Wright own goal, but then Tony Mowbray, Richard Naylor and Marcus Stewart ensured Ipswich were 3-1 up just before the hour-mark.

A Craig Hignett penalty gave Barnsley hope, but Martijn Reuser would go on to score Ipswich's fourth in the 90th minute to send Ipswich up.

Ipswich remarkably went on to finish fifth in their first year back in the Premier League, but are yet to return since going down in 2001-02. 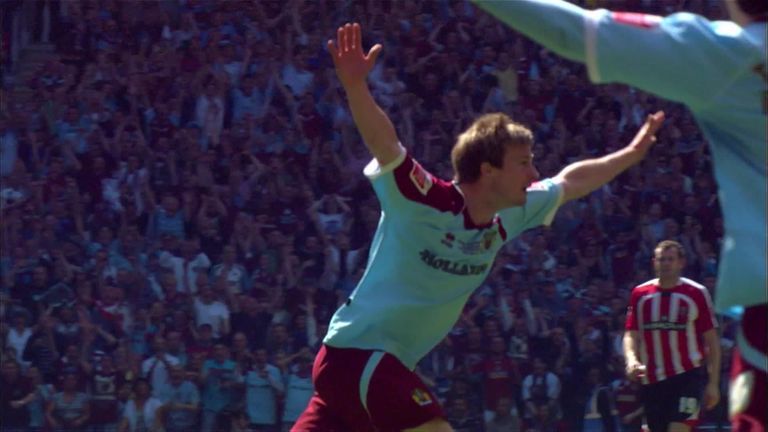 1:34 Wade Elliot explains the emotional story behind his play-off final moment after scoring the winner to seal Burnley's promotion to the Premier League in 2009

After a 33-year wait for top-flight football, Wade Elliot's stunner booked Burnley's place in the Premier League at the expense of Sheffield United. His curled effort in the 13th minute evaded Paddy Kenny, and proved enough to send Owen Coyle's side up…

"The ball sort of squirmed back to me, it didn't roll, it was spinning," Elliot recalls. "I knew the only way I could strike it was with my in-step. I managed to use the spin of the ball and caught it really nicely. My first thought was, 'Christ I've just scored at Wembley!'

"My mum and dad were in the opposite corner of the ground so I went racing off towards them, got towards about the halfway line and probably had time to process it a little bit by then. 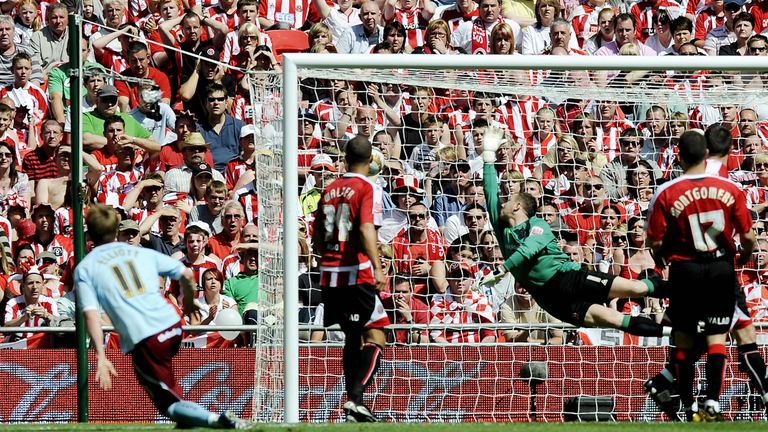 "My dad had an operation, he had throat cancer, and it was touch and go whether he was going to come to the game or not. It was a few years [before] but he was a bit frail from it.

"I spoke to him the night before the match. He said 'It's three years to the day since I had my operation, I won that, and you're going to win tomorrow'.

"So obviously the goal, and running in front of them at the final whistle, it was an emotional occasion and perfect how everything came together." 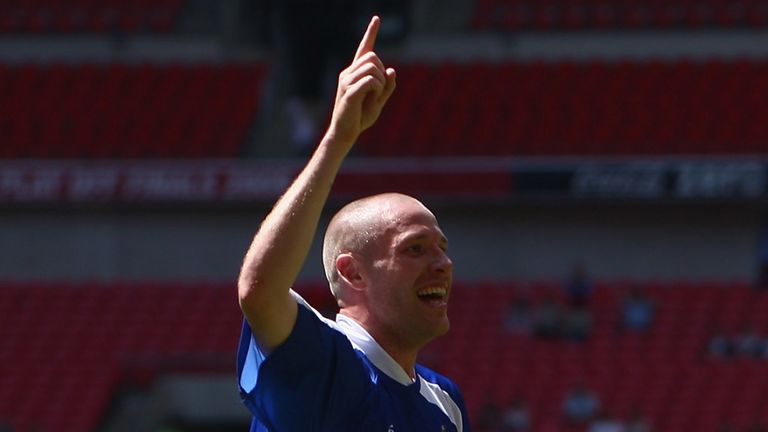 1:30 Gary Alexander discusses his sensational goal in the 2009 League One play-off final for Millwall against Scunthorpe – and how it now inspires his son

Scunthorpe secured promotion to the Championship after a thrilling 3-2 victory over Millwall in the League One play-off final.

Gary Alexander was on the losing side that day, but the first of his two goals sent the Sky Sports commentary team wild…

What a goal that is! That is one of the greatest goals you will ever see at Wembley from Gary Alexander to put Millwall level! 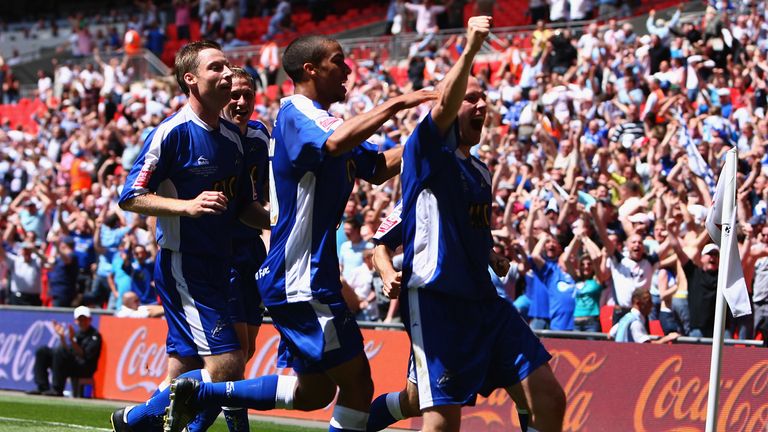 You can say anything about the best players in the world, play for Barcelona, Man United, anybody you can name, you won't see a better strike than that…

"To have some of the names mentioned in the commentary is a special moment for me," Alexander tells Sky Sports.

"To be remembered for a goal at Wembley… If you score that at Macclesfield or Blackpool maybe it wouldn't go down in so much history, but scoring that goal at Wembley is something fans will remember for years and years when I'm long gone.

"My youngest son wasn't born at the time but he is proud to see it and know it's his dad who scored that goal. Every now and then he'll replay it, or in the garden or park trying to score that volley, and doing the commentary he almost knows it off by heart."

At home… with Championship stars

Sky Sports joins some of the biggest names in the Championship at home… including Leeds, Derby and Nottingham Forest.

Having previously lost three play-off finals, 39-year-old Kevin Phillips still had the nerve to take matters into his own hands when a young Wilfried Zaha was fouled in the Watford box in extra time.

Phillips stepped up, and coolly found the top corner from 12 yards out, with the penalty enough to end Palace's eight-year absence from the Premier League.

"Part of me didn't want to play another play-off final, I lost three and I know what it's like, it's horrible and the worst place to be when you lose a match," Phillips tells Sky Sports. 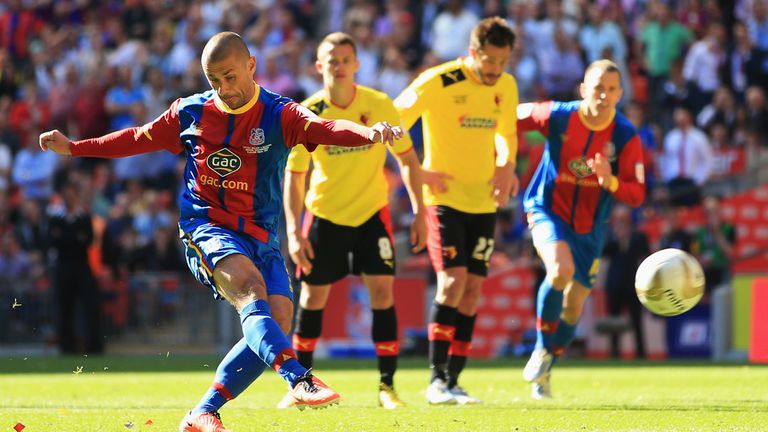 "But when that final whistle went it was elation, because of course losing three finals. People say it's the best way to get promoted, I'd rather first or second, but I can see what they're saying."

Phillips would go on to leave Palace the following January, but only after he featured in the Premier League at the ripe old age of 40. 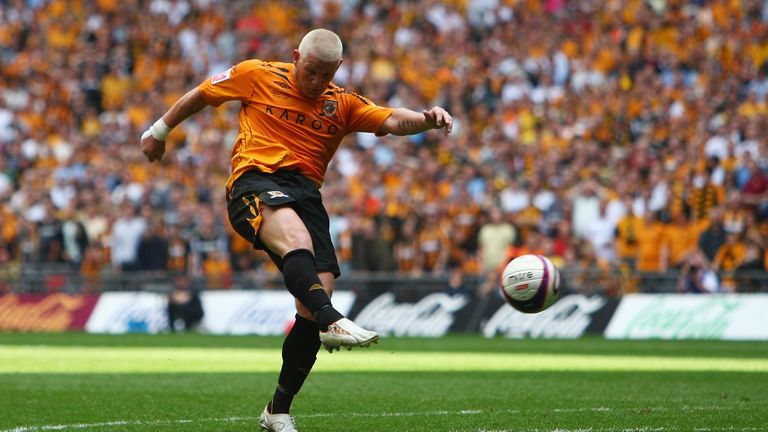 As dream finals go, it does not get much better than scoring the winning goal for your hometown club at Wembley to send them into the Premier League.

And what a goal it was…

"I did all his dirty work!" Fraizer Campbell tells Sky Sports. "I think he was on the edge of our box when I was running through so he's done well to get that high up the pitch that quick."

Dean Windass finally reaches the edge of Bristol City's penalty box: "I saw Fraizer and thought just play it back to me, I wanted him to roll it on the floor, but because he had to clip it over" ... and the rest is history. Windass' first-time volley, while virtually standing on the 18-yard line, flies past Adriano Basso.

"Listen we do it every day of the week in training and normally it goes in the trees or hits somebody's window. Thankfully for me it went in the top corner." The 38th-minute strike, which proved to be the winner, prompted Windass to sprint to the other end so he could celebrate with the Hull fans.

"I wish Phil Brown had brought me off then because I was absolutely gone! My legs had gone. Phil said in the week before training, give me 60-65 minutes, and I said yeah perfect, I'll score the winning goal before I come off.

"I honestly said that, I don't know why I said it. It got to about 67 minutes and he put the board up, and it was Barmby [coming off], and I looked over to the bench to say 'are you having a laugh'. It was that hot, I didn't want to do a warm-up. I'm an old man!

"But when I came off, I've got a picture with me and Nicky on the bench just waiting for the referee to blow the whistle. Fraizer came off towards the end, and we just ran towards the other end and I just broke down crying. It was crazy." *Don't forget to tune into 'My Play-Off Final' on Sky Sports News and Sky Sports Football from 3pm on Monday.

This news item was provided by the SkySports | News website - the original link is: https://www.skysports.com/football/news/11688/11992117/countdown-of-the-efl-play-off-finals-greatest-games-15-11