Second-half substitute Tom Eaves scored a dramatic late equaliser as Hull secured a hard-fought point in a thrilling 4-4 draw with Swansea at the KCOM Stadium on Friday night.

Leonardo Da Silva Lopes opened the scoring for the Tigers (6) and Wayne Routledge equalised shortly after to send the two sides in level at the break (14), before Marcus Maddison's first goal for the hosts made it 2-1 after 50 minutes.

Kyle Naughton then levelled for the Swans once more (55), but Mallik Wilks put Hull ahead for a third time just after the hour (61). A first league goal for Jordon Garrick (77) and a strike from Rhian Brewster (84) put Steve Cooper's visitors in front for the first time in the match, but Eaves slid home in stoppage-time to earn a deserved last-gasp equaliser (90+5).

The draw means neither side moves up or down in the Championship standings; Swansea sit five points outside the play-off places in ninth, while Hull's winless run continues, leaving them in 15th.

How the eight-goal thriller unfolded at the KCOM

Without a win since New Year's Day, any hopes of a late dash for the play-offs Hull harboured had received a monumental blow over the last month, with five defeats from the last six leaving the Tigers languishing in the lower echelons of the table. 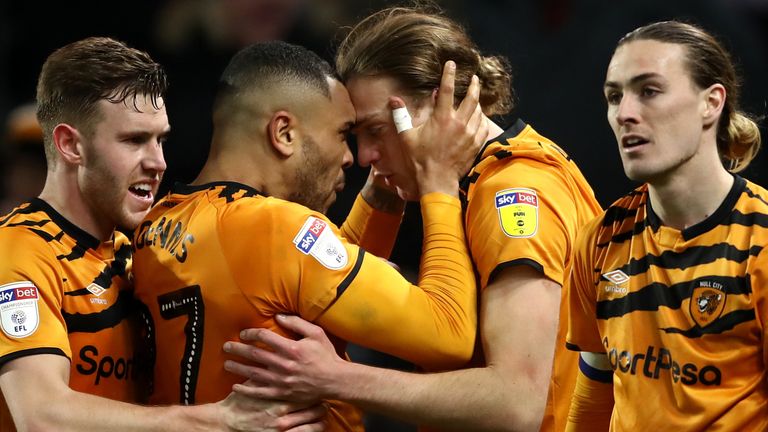 The intent to emerge from that slump was evident in a bold start from the hosts. Within two minutes they had a free-kick on the edge of the area and with just six minutes on the clock they had the lead when the unmarked Da Silva Lopes squeezed home after collecting Callum Elder's cross.

Despite Swansea's own downturn in form, they had picked up 15 points from losing positions across the season and were soon back on level terms in East Yorkshire. Routledge was left with a simple finish from six-yards out after a mazy run and cut-back from Conor Gallagher. 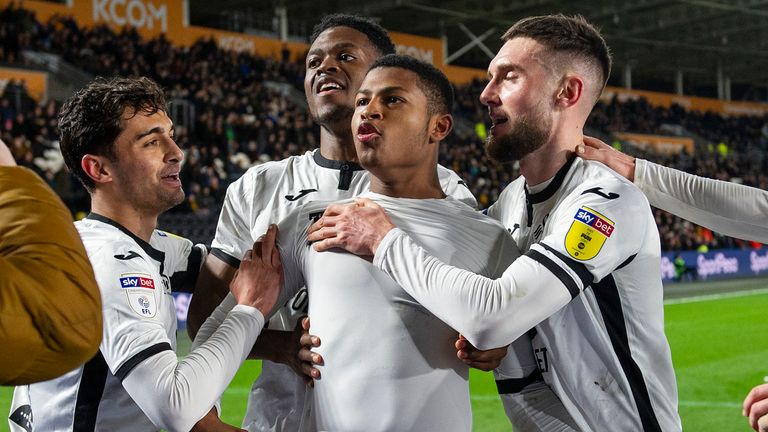 Image: Rhian Brewster looked to have won the game for Swansea late on

How did Rhian Brewster get on?

After playing 90 minutes against QPR in midweek, Steve Cooper opted to leave the Liverpool loanee on the bench for the trip to Humberside, but even though he entered the fray with less than 30 minutes to play, the 19-year-old made an impressive cameo for Swansea.

His first contribution was to find Andre Ayew with a neat touch-and-go on the edge of the area, though it came to nothing. Later on, however, he looked to have won the game for the visitors with the third goal of his loan spell on south Wales.

Occupying a spot around seven yards from goal, he reacted quickly to Conor Gallagher's heavy touch on a cross from the right, swivelled and found the bottom left corner via a deflection. He removed his shirt in a passionate celebration afterwards and was shown his third yellow card of the season as a result.

After the restart, the Tigers edged themselves in front again when Maddison thumped in after his initial shot came off the back of Ben Wilmot's head, but it mattered little five minutes later when an unmarked Naughton converted a short Matt Grimes corner.

It was end to end from there on in. Wilks showed persistence to guide the ball past Freddie Woodman after Jay Fulton had blocked his header but Andre Ayew had the bit between his teeth and raced to the byline to square for Garrick to tap home for 3-3 inside the six-yard box.

Hull boss Grant McCann made just one change to the side that lost 3-0 away at Hull in midweek, as Matthew Pennington started in place of George Honeyman.

Meanwhile, Steve Cooper made four alterations from the stalemate against QPR on Tuesday night, with Rhian Brewster among those who dropped out of the starting line-up. Jake Bidwell, Jay Fulton, Ben Wilmot and Wayne Routledge returned.

The Ghanian was furious to see appeals for a penalty turned down when his shot appeared to strike the hand of Ryan Tafazolli, though Brewster looked to have sealed the win for the Welsh side with six minutes to play when he arrowed in after being teed up by Chelsea loanee Gallagher.

As six minutes of stoppage-time was added by fourth official Darren England, it seemed to be a simple case of battening down the hatches for the visitors, but Eaves had the last laugh when he diverted Josh Magennis' cross over the line.

Man of the match - Josh Magennis

Often this season, the starting spot up front for Hull has been given to Magennis and Tom Eaves on a rotating basis, but tonight the pair of them made a valuable impact to the game. Not only did the former set up Eaves for the equaliser, but he had 36 touches of the ball and made three key passes. His hold-up play is a vital asset for Grant McCann's team.

What the managers said…

Hull's Grant McCann: "To be honest, I'm lost for words. It was a bit kamikaze, it was a bit like a basketball game. One thing I'm pleased about is that we've got our attacking intent back and the new boys have scored some goals but it's hard to talk at this present time without analysing the game. 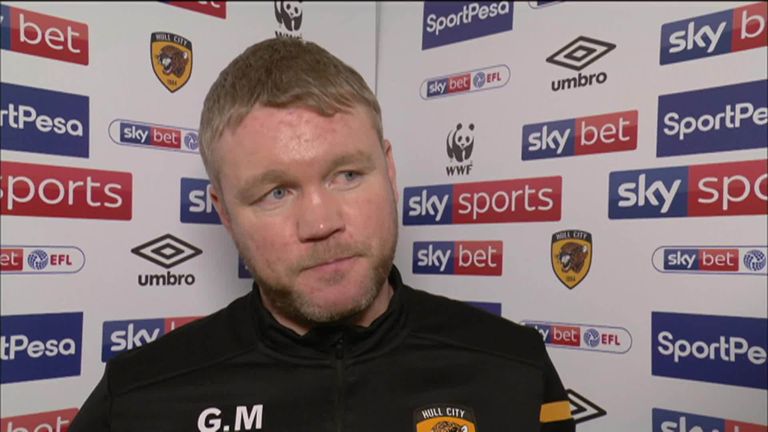 2:41 Grant McCann said he was lost for words as he reacted to Hull’s 4-4 draw with Swansea. McCann felt his team made some ‘silly’ errors which cost them dearly

"There were a lot of silly things that we did tonight. Credit to Swansea, they took advantage of it but we're a little bit low on confidence at the minute. One thing this group has got is a real determination to keep going and going. It's a game that we should have seen out - we were in the lead three times. It's a frustrating one."

Swansea's Steve Cooper: "Our goals are well-worked goals that we'd expect to score, their goals are giveaways. Every ball into the box; we've not headed the first one, we've not picked up the second one and if you don't do that, you're going to concede goals. 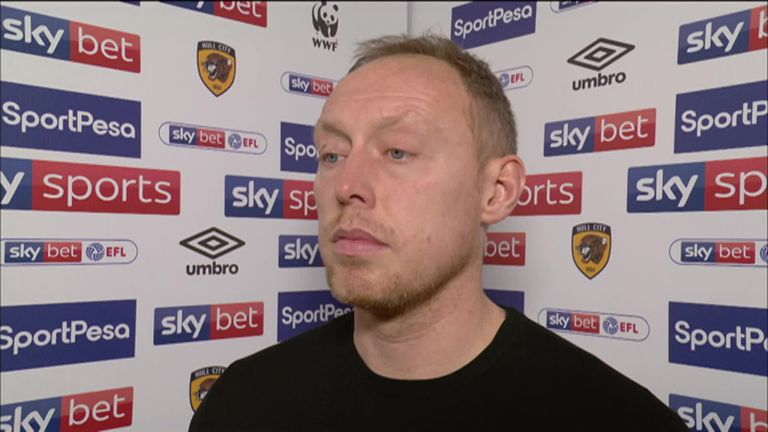 2:25 Steve Cooper was disappointed with the defensive display as Swansea drew 4-4 away at Hull in the Sky Bet Championship

"We have, again, shot ourselves in the foot. Having got back into the game on so many occasions and then taken the lead, we fell for that long ball into the box again that we've not headed, we've not competed well enough and in the end, we've given points away."

Both sides are next in action on Saturday, February 22 at 3pm. Hull travel to Deepdale to face Preston, while Swansea host Huddersfield at the Liberty Stadium.

This news item was provided by the SkySports | News website - the original link is: https://www.skysports.com/football/hull-city-vs-swansea/report/409737

Previous: Manchester City will take European club football ban ‘in their stride’ – Michael Brown
Next: Arteta – How we can get the most out of Pepe
Follow us on Twitter!! >> @AllUKFootball