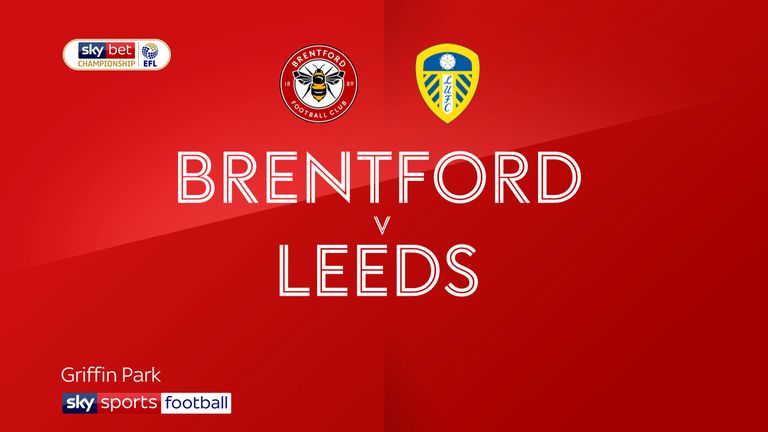 2:04 Highlights of the Sky Bet Championship match between Brentford and Leeds.

Highlights of the Sky Bet Championship match between Brentford and Leeds.

Leeds could not turn a dominant performance into three valuable points in the Championship promotion race in a 1-1 draw at Brentford.

The hosts would have leapfrogged their visitors into second with victory and took the lead 25 minutes in when an error from under-fire keeper Kiko Casilla offered Said Benrahma an open goal.

Seven minutes before the interval, Brentford goalkeeper David Raya joined his opposite number in adding to the bloopers reel when he came and missed a corner, which was deflected into the path of Leeds defender Liam Cooper to fire home from six yards.

Helder Costa failed to test Raya from the edge of the box after half-time and Patrick Bamford fired over the bar on the turn, but Leeds could not turn their dominance - including almost 70 per cent of possession - into victory, and third-placed Fulham could jump above them when they play their game in hand at Millwall on Wednesday night.

How Leeds put poor form behind them

Before kick-off, even a restless Marcelo Bielsa may have considered a point a good result at a Brentford side who had won seven of their previous eight home league games, and with the Whites on a run of nine points from their previous 10 matches. Said Benrahma netted his ninth league goal of the season

But given the performance he witnessed over the 90 minutes, he might have changed his mind.

After a bright opening few minutes where Josh Dasilva fired straight at Casilla from 20 yards, the hosts struggled to keep up with Leeds' intensity and tempo. But the visitors shot themselves in the foot when their Spanish goalkeeper slipped over on the ball and allowed Benrahma an open goal to score the first of the night.

Brentford were unchanged from their weekend win over Middlesbrough, while Leeds' one alteration saw Kalvin Phillips return from suspension for Ezgjan Alioski.

Before that goal, Leeds had produced the best chance of the game through Jack Harrison's weak effort from a strong position, but their equaliser was far more routine. When Raya flapped at a corner and Ben White deflected the ball into Cooper's path, he met it well to fire into the roof of the net.

After half-time, Brentford improved but still could not produce anything meaningful against an unusually resolute Leeds backline. Instead, Costa should have at least tested Raya when he fired Pablo Hernandez's one-two into the goalkeeper's gloves. 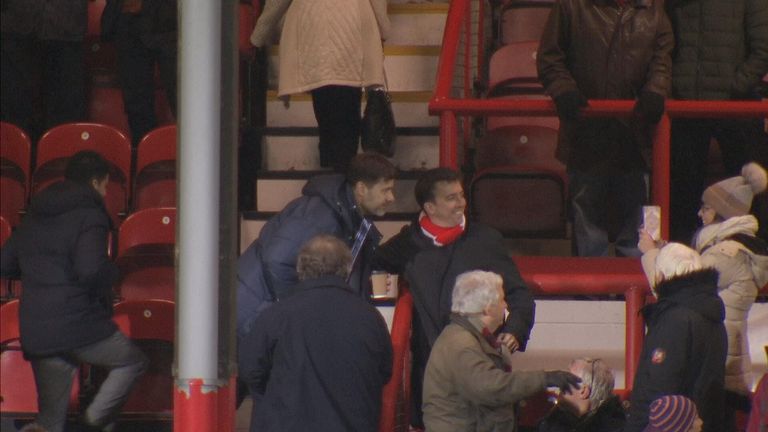 1:30 Mauricio Pochettino was in attendance at Griffin Park as his former manager Marcelo Bielsa took charge of Leeds

Bamford volleyed over Dallas' cross in one of few chances in the latter stages of the game, with Leeds in full control while the hosts stood strong inside their own 18-yard box.

Hernandez's effort from a corner was glanced over his own bar by Tariqe Fosu-Henry in the dying moments, but the hosts hung on for a hard-fought draw which lifts them to fourth, two points behind second-placed Leeds.

Brentford's Thomas Frank: "One of the reasons for that is that Leeds do things very differently compared to any other team in the division.

"The way they press, constantly, man for man, going towards the man, that makes you have less time on the ball. That's why we didn't have the time to create enough. I think it was a fair result, maybe it was even a 0-0 game. There were very few chances."

Leeds' Marcelo Bielsa: "Kiko doesn't need my words because I always support him and his decisions. Because I know the human quality of the players of Leeds, I think he will receive support from his team-mates and not lose confidence.

"We defended well, was difficult to attack for us even though we attacked all the match. The players left everything on the pitch. We controlled their attackers well, we managed the ball well, and this is not easy against a team like Brentford."

Man of the match - Julian Janvier

Along with defensive colleague Ethan Pinnock, Janvier defended his own 18-yard box superbly and seemed unbeatable, especially from the 22 crosses Leeds put into the area in open play.

The centre-back pairing impressed from set-pieces too, though they were let down by an error from goalkeeper Raya. But Janvier's smart play to take the ball off the toe of Leeds substitute Jean-Kevin Augustin inside the box late on earned him the award.

Both sides are back in Championship action at 3pm on Saturday. Brentford head to Birmingham and Leeds host Bristol City.

This news item was provided by the SkySports | News website - the original link is: https://www.skysports.com/football/brentford-vs-leeds/report/409722