Report from the Sky Bet Championship clash at Hillsborough 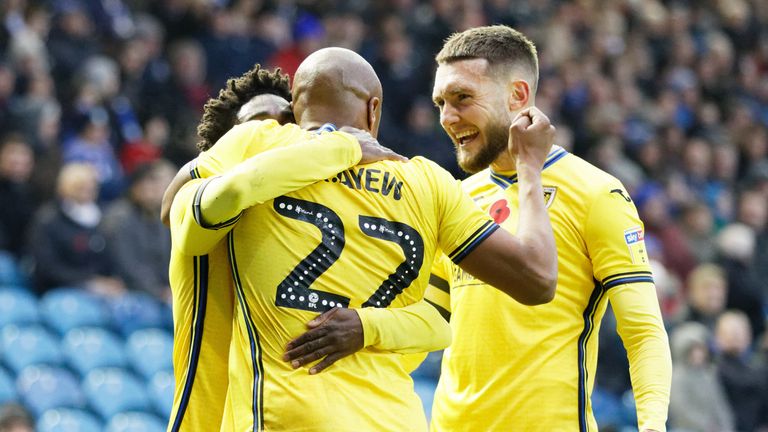 Late drama saw Swansea extend their unbeaten league away record with an equaliser deep into stoppage-time to make it 2-2 at Sheffield Wednesday after conceding moments earlier.

The home side thought they had won it when Morgan Fox put them ahead but Ben Wilmot struck at the death to level.

Wednesday went close to taking the lead inside the fourth minute when a corner from Kadeem Harris picked out Jacob Murphy and his first-time shot was saved by Freddie Woodman, who pushed the ball onto his left-hand post.

Atdhe Nuhiu also threatened with a curling 20-yard effort which was not far off target.

As the hosts continued to apply early pressure, Woodman parried Steven Fletcher's header and Nuhiu looked to get on the end of the rebound but Ayew was on hand to head clear.

The visitors survived another scare on the half-hour mark when Kieran Lee's cross found Fletcher whose header came back off Woodman's left-hand post.

Swansea took the lead against the run of play when Westwood failed to deal with a Matt Grimes corner and Ayew (32) pounced on the loose ball, smashing it into the net from close range.

Bersant Celina put a low drive wide while at the other end, Barry Bannan fired in a 30-yard effort which was on target but straight at Woodman.

Wednesday threatened soon after the restart when Fletcher's searching low cross from the left picked out Murphy, running in at the near post, who shot wide under pressure.

Wednesday hit the woodwork for a third time just after the hour-mark. Fletcher's header from a Harris cross was saved by Woodman and Murphy smashed the loose ball against the keeper's left-hand post.

The hosts had a strong appeal for a penalty turned down after Nuhiu appeared to be hauled to the ground inside the area.

Swansea threatened twice in quick succession with Ayew putting a header wide from a Wayne Routledge cross and Wilmot heading against a post.

Westwood made a fine save down to his left to keep out a shot on the turn from Ayew.

Wednesday equalised when Adam Reach's low drive was parried by Woodman and Lee put the ball across the face of goal for Forestieri (81) to finish from close range.

Fox struck in time added on after Iorfa headed down following a corner before Wilmot equalised with a far-post header following a Grimes corner.

Sheffield Wednesday's Garry Monk: "It was very frustrating in the end. The effort and commitment is there and it's clear they're fighting hard for each other, but set-pieces in the last two games have cost us. You need to focus on what you've trained very hard to do. The roles are very clear and you need to focus on what you need to do but unfortunately we haven't done that in those two critical moments in the last two games.

"We probably should be stood here with six points from the last two games but we have the one. How the ball didn't go in for us in the first half is quite unbelievable. To fight back and get that lead shows there's a lot of effort and commitment. There's a lot of positives but of course there's work to be done during the international break ahead of our busiest period when we come out of it."

Swansea's Steve Cooper: "I guess there's a little bit of relief, having gone 2-1 down and thinking the last thing we deserved was not to get a win today. It's a difficult place to come and I thought Sheffield Wednesday started the better. They're a real threat with the way that they play, but we managed the storm and then just completely controlled the game in the first half.

"You just want to see the game out but we conceded a couple of soft goals from our point of view. I'm just pleased that we didn't lose because it would have been a travesty after the way we played. In the end, we're quite pleased that we got a point but we created some really good chances. We're having to work hard for every point."

This news item was provided by the SkySports | News website - the original link is: https://www.skysports.com/football/sheff-wed-vs-swansea/report/409538