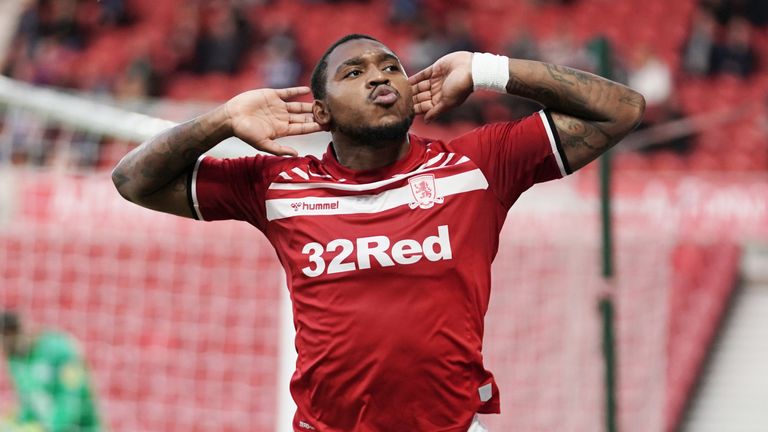 Britt Assombalonga scored twice for struggling Middlesbrough as they drew 2-2 at QPR in the Sky Bet Championship.

Boro were staring at another defeat before Nahki Wells' appalling back-pass went straight to Assombalonga, who capitalised by calmly lifting the ball over keeper Joe Lumley.

Wells' ninth goal of the season had brought Rangers level just after they had fallen behind to Assombalonga's first, and an own goal by Jonny Howson a minute before half-time meant the hosts led at the interval.

After 'keeper Darren Randolph pushed out Grant Hall's header, the ball bounced off the unfortunate Howson and into the net.

That seemed to sum up what has been a miserable season for Jonathan Woodgate's Boro side so far - but they left with a point courtesy of Assombalonga's 69th-minute equaliser.

Boro, now without a win in nine games and having not scored in their previous four, were the better side early on and went ahead through Assombalonga's 23rd-minute opener.

Howson went past Ryan Manning and crossed from the right towards Assombalonga, who got in front of Hall to head beyond Lumley.

Manning made amends by helping to set up a goal just two minutes later.

Manning played the ball in to Ilias Chair, whose flick to Wells left the striker with time and space to pick his spot and calmly equalise - despite Boro's protests for offside.

Earlier the flag did go up - seemingly for offside - when the visitors thought they had gone ahead after Daniel Ayala headed in Marvin Johnson's right-wing cross in only the second minute.

QPR, yet to keep a clean sheet this season, continued to look vulnerable and Lee Wallace, making his home debut, denied Assombalonga with a last-ditch tackle shortly before another Johnson cross was headed straight at Lumley by Marcus Tavernier.

It therefore came as no surprise when Boro opened the scoring.

However, Rangers hit back almost immediately and then would have gone ahead had Randolph not produced a fine save by diving to his left to keep out Hall's header from Ebere Eze's free-kick.

Another Hall header, this time from Eze's corner, led to Rangers going in front, but Wells' appalling lapse and some heroic work by Randolph means they are now without a win in four matches.

Randolph produced excellent saves to deny Hall, Wells and Eze in the closing stages and Rangers substitute Jordan Hugill - playing against his hometown club - headed wide of the target.

This news item was provided by the SkySports | News website - the original link is: https://www.skysports.com/football/qpr-vs-mboro/report/409536