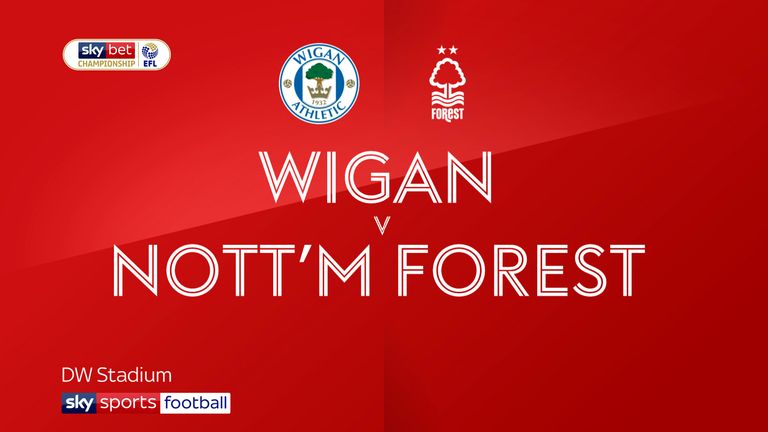 1:58 Highlights of the Sky Bet Championship match between Wigan and Nottingham Forest

Jamal Lowe scored his first goal for Wigan as they beat Nottingham Forest 1-0 in the Sky Bet Championship, bringing an end to Forest's 10-game unbeaten run.

Wigan continued their fine home form as Lowe - who joined from Portsmouth in the summer - turned the ball in with his shin in the 35th minute to ultimately seal the victory.

Ahead of the game, Forest boss Sabri Lamouchi made five changes with Lewis Grabban not in a league XI for the first time this season and it showed, particularly in the first half, with a lack of cutting edge seeing the visitors suffer a second defeat of the campaign.

The win lifts Wigan up two places into 18th with 14 points - having lost just one of their last 16 games at the DW Stadium - while Nottingham Forest missed the chance to go top of the Sky Bet Championship and remain in fourth. 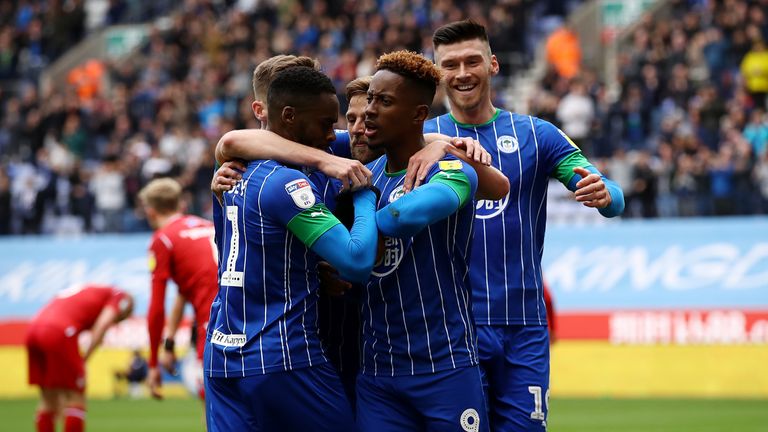 Jamal Lowe celebrates after scoring the winner for Wigan

There were a few half chances in the opening 30 minutes, although the finishing left a little to be desired. Nottingham Forest had a huge penalty shout in the 27th minute when Sammy Ameobi was pulled down by Antonee Robinson as he got into the area and was unintentionally caught by the Wigan defender's stray boot as he went to ground. However, the referee waved away the claims as Wigan broke, but play was soon halted so Ameobi could receive treatment.

A few minutes later, Forest had two wonderful chances to take the lead. The first saw Matty Cash nip onto a loose Antonee Robinson clearance before feeding Yuri Ribeiro inside the area. However, he could not sort out his feet as Lewis Macleod cleared the loose ball, which just skipped past Jack Robinson's outstretched foot. Rafa Mir then headed a sensational Joe Lolley cross just wide of the post, having got ahead of Chey Dunkley.

Wigan were the better side in the first half and took the lead in the 35th minute. Lowe got the better of Ben Watson just outside the area before feeding Gavin Massey down the left. He then cut the ball back for his team-mate, who got between Cash and Tobias Figueiredo to turn home his first Wigan goal with his shin. Five minutes later, Charlie Mulgrew curled a free-kick onto the crossbar as the Latics almost made it two.

The hosts began the second half well too, but it was Forest who had the better early chances. Mir once again headed wide in the 55th minute, failing to beat the goalkeeper from close range. He was replaced not long after by Grabban, but he also directed a header straight into the hands of David Marshall just after the hour mark.

Forest goalkeeper Brice Samba kept his side in the game as Wigan searched for a late second. He twice denied Kal Naismith in the 86th minute, diving to push away his cross before the striker tried to place the ball, but Samba was level to it again, leaping to keep him at bay. Naismith tried to get the better of the Forest stopper again in the 93rd minute - this time from the top of the area - but another fine Samba save saw him denied.

What the managers said

Wigan manager Paul Cook: "It wasn't so much a big win, all wins are important in this division. I think the game plan panned out as both teams thought it would. When the moments come along in the game that you must take, which most of the big players do, and we took that moment.

"I thought we had to defend resolutely at times, especially in the second half when you know Forest are going to test you, but we worked ever so hard today and I'm delighted for the players.

"When we did get towards them, we carried that threat of scoring again. We had a couple of good opportunities and we're delighted with the result. Our away form is something we've got to try and address now because if we can improve it, we can get ourselves into a really good position in the league." 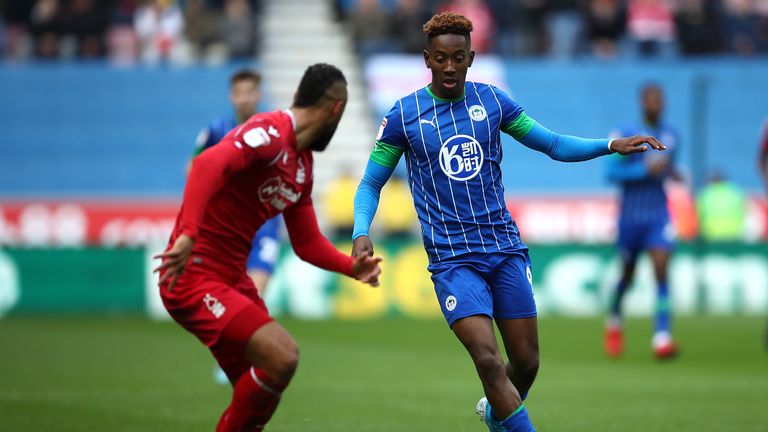 Nottingham Forest manager Sabri Lamouchi: "For me, we started the game in the right way. We gave them the opportunity to score and after that, they're confident and they played much better than the first half. Before the break we tried a lot but we missed a lot with a lot of mistakes.

"We lost concentration for the last ball but my players didn't deserve this result. The draw was more logical but congratulations to Wigan because they played like they usually do at home. We are disappointed of course but we need to focus on the next one now, it is very soon.

"So many changes was logical, it was a different tactical choice but we see a lot of mistakes. Maybe it was a mistake on my part also, but at the end, we can do much better than this."

Man of the match - Joe Williams

It was Williams - along with Macleod - who kept things tight in the Wigan midfield and stopped Forest from getting into their stride.

His stats make for fine reading too, ranking first for passes (46), interceptions (5) and possession gained (12), while he was also second for touches (61). A great afternoon for him and a good win for Wigan.

Wigan will travel to Derby for their next Sky Bet Championship game on Wednesday, which will be live on the Sky Sports Football red button. Nottingham Forest will also be live through the red button as they host Hull City on the same evening.

This news item was provided by the SkySports | News website - the original link is: https://www.skysports.com/football/wigan-vs-n-forest/report/409491