10 key Championship signings | Total Football News
Eddie Nketiah has joined Leeds on a season-long loan deal from Arsenal We pick out 10 key signings and loan deals for players who have arrived in the Sky Bet Championship and could make a big impression this season... Krystian Bielik, Derby - fro... We pick out 10 key signings and loan deals for players who have arrived in the Sky Bet Championship and could make a big impression this season...

The deal for Wayne Rooney has made all the headlines at Derby, meaning their record signing has somewhat slipped under the radar since his arrival.

Bielik made a big impression on loan at Charlton last season, helping steer the club to promotion through the League One play-offs. The 21-year-old is mainly a defensive midfielder but can also play as a centre-back, should Phillip Cocu need cover for Matt Clarke or Richard Keogh, or opt occasionally to switch to a back three. A midfield role is more likely, however, as Derby look to cover for the departures of Bradley Johnson and Mason Mount.

"He is a young player and it is a permanent deal, which I think is a very good investment for the club," Derby boss Cocu said. "I am very happy he has joined the team. He will get better and develop, but for his age he is a very good player." Krystian Bielik was signed by Derby in a club-record transfer

If Leeds had a more prolific striker in their squad last season than they could easily have spent this week planning for their opening game back in the Premier League.

Kemar Roofe managed 15 goals, while Patrick Bamford scored 10, but the former has left for Anderlecht and now Marcelo Bielsa will be hoping young Nketiah can fill that void following his arrival on loan from Arsenal.

Now 20, Nketiah announced himself with two goals off the bench in an EFL Cup tie against Norwich in 2017, and notched his first Premier League goal on the final day of last season against Burnley. He also enjoyed a hugely positive pre-season tour with Arsenal, looking comfortable among the first team and getting on the score sheet a few times.

Knockaert may never have quite mastered the transition to the Premier League with Brighton, but he has shown in the past he has the quality to excel in the Championship and should be invaluable to Fulham's promotion bid this season.

The French winger has already won promotion twice to the top flight, first with Leicester and then again with Brighton. He has 33 goals and 29 assists to his name in 149 appearances at Championship level, and was arguably the best player in the division when the Seagulls won promotion in 2016/17.

With Ivan Cavaleiro on the other wing and Aleksandar Mitrovic up front, Knockaert should have plenty of opportunities to add to his tally of goals and assists this season.

There are very few clubs in the Championship better at raiding the lower leagues than Preston, and they appear to have picked up another gem in Bayliss. The young central midfielder has only just turned 20 but has already featured for two seasons at Coventry, playing a key role in their promotion from League Two and then making 38 appearances for them in League One. He is tall and strong on the ball, but also has the ability to run with it at his feet.

"He is a young lad who has got huge talent," said Preston boss Alex Neil. "In League Two he got promoted and in League One he had a very good season and we are hoping to continue his development.

"As long as we provide enough experience for the lads throughout the spine of the team, I think our main objective will also be to get younger players, develop them and bring the best out of them. That has been a successful model for the club and that is something we will continue." 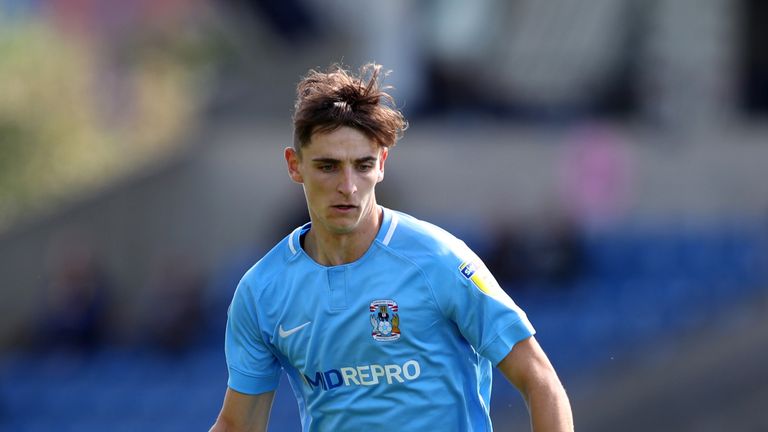 A bit of a left-field pick, but Eaves has scored 38 goals in the past two seasons in League One, and he has managed that for a Gillingham side that he has carried on his own back at times.

Only James Collins scored more goals in the third tier last season, and he managed that for a Luton outfit romping to promotion. Gillingham finished 13th, just five points clear of the relegation zone. Fraizer Campbell notched 12 goals for Hull last season, but he departed in the summer, and their next most proficient striker, Nouha Dicko, managed just two.

If Eaves can score goals for Gillingham then there is no reason the 27-year-old, supplied by the likes of Jarrod Bowen, Kamil Grosicki and Jackson Irvine, can't make a decent impression in the Championship.

First-choice goalkeeper Jonas Lossl left for the bench of Everton in the summer, so boss Jan Siewert has opted for youth rather than experience to fill the gap at Huddersfield.

Grabara, 20, is an imposing figure at 6ft 5in and his only first-team experience before moving to the John Smith's Stadium was a loan spell from Liverpool at Danish club AGF in the first half of this year.

His debut wasn't an easy one as they were beaten 2-1 by Derby, but he was left horribly exposed by his defence for both goals and it will be interesting to see how he develops over the course of the season. The Polish goalkeeper was linked with a move to Rangers, in a link-up with his former youth-team coach Steven Gerrard, but instead opted for the Championship. No doubt Jurgen Klopp will be keeping a keen eye on his progress. 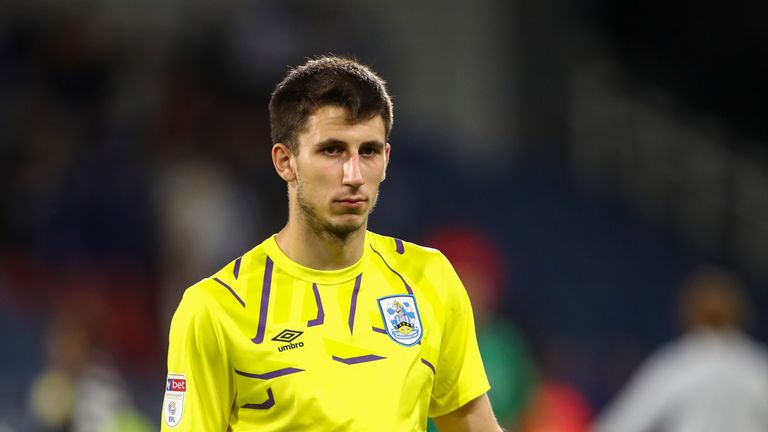 Kamil Grabara is on loan at Huddersfield from Liverpool

One of the standout players in League One last season, Lowe scored 15 goals for Portsmouth and was always likely to make the step up after they failed to win promotion.

There was some surprise, perhaps, when Lowe opted to join a club that flirted with relegation last season, particularly with a few bigger clubs in for him. But Paul Cook was the man who originally brought the 25-year-old winger to Portsmouth from non-league in 2016, and he couldn't resist the opportunity to link up with his former boss.

Lowe generally operates off the right and mixes direct running with cool finishing, and it will be interesting if he can operate to a similar standard at a higher level.

Goals were a massive problem for Stoke last season, as they managed less than one a game in the Championship. In fact, only the relegated pair of Bolton and Ipswich notched fewer than their total of 45.

It is a situation that boss Nathan Jones has attempted to rectify by signing Hogan on loan, who never quite got going at Aston Villa in his two-and-a-half years since arriving from Brentford, but in a brief loan spell at Sheffield United earlier this year he did score a couple of goals to help them over the line for promotion.

"He had a fantastic time at Brentford but it hasn't quite worked out for him at Villa," said Stoke boss Jones. "But these things happen. We want him to find a home with us, start playing again and score goals." West Brom have a huge void to fill. Dwight Gayle and Jay Rodriguez scored 45 goals in the Championship between them last season and both are no longer at The Hawthorns.

The Baggies won their opener under Slaven Bilic at Nottingham Forest on Saturday, but question marks remain over whether Kenneth Zohore, who has only ever hit double figures once in a league campaign, will be proficient up front.

That will put a lot of expectation on Austin, and particularly upon the fitness of the striker whose entire three-and-a-half years at Southampton was blighted by injuries. There is no doubt, however, that when he is fit he will score goals. And that is what West Brom will need if they are to push for promotion again this season.

It has been another typically busy transfer window at Griffin Park. Brentford seem to move half their squad on every six months or so, and the likes of Romaine Sawyers, Ezri Konsa and Neal Maupay have already gone.

One thing the Bees always do, however, is recruit extremely well to replace their outgoings, and Mbeumo, 20, looks like a shrewd addition, having hit double figures for Troyes in Ligue 2 in France last season. At one stage it did look as though he would be a replacement for either Ollie Watkins or Said Benrahma, but it seems both now are set to stay so it will be interesting to see how he fits alongside them into the side.

"Bryan is exactly the sort of player we want at Brentford," head coach Thomas Frank said. "He is quick, he is direct, he can beat people attacking one-on-one, he can arrive late in the penalty area and he can score goals."

This news item was provided by the SkySports | News website - the original link is: https://www.skysports.com/football/news/11688/11780140/championship-summer-signings-eddie-nketiah-charlie-austin-and-anthony-knockaert-among-10-key-arrivals